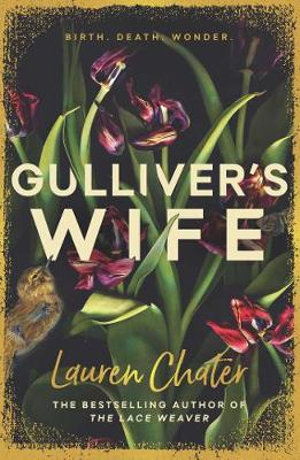 I don’t usually write book reviews for my blog, but there are so many good books being released and caught up in the Covid-19 isolation that I thought I’d give some of them just a little extra push.

I love the premise of this novel, a fictional extension of Jonathan Swift’s eighteenth-century, Gulliver’s Travels, the story of a doctor who sets sail for adventures and find strange new worlds. Swift’s work was allegorical, a comment on English politics of the time.

But Chater recognises that the personal is political and in her premise for the story, asks, But what about the family? His wife Mary, especially, his daughter and his son. While men like Gulliver and Swift have grand plans and grand thoughts they wish to tell the world, Chater considers the plain facts of life: how a woman is to survive in a patriarchal world; how a man can leave her with no income and then return, spending his money, and the money she has earned, however he wishes. It’s an issue familiar from most great quest tales, as old as The Odyssey’ and on, through medieval knights and Victorian adventurers. Chater’s questions, as domestic and familiar as they might seem, are a challenge to Swift and his clever tale.

The wonderful Prologue — worth reading a few times — cleverly describes Gulliver, washed up on the sand: ‘The sea has given birth to a man’. His past is there, his education, his life along the Thames, his failure to save men on the operating theatre, so debilitating that it sent him on his adventures:

‘It proved beyond him to help those men, but perhaps he can help himself. He can free his mind of its bonds, help cut away the extraneous fetters that bind him to his this life. One by one, he sets them loose: his daughter, his son, his maps. His wife.’ (3)

I love this, and the way it alludes Gulliver’s personal life as well as the ‘little people’ he encounters. Chater then wisely allows Gulliver’s stories to sink mostly into the background, although Mary is obliged to defend her husband’s sanity when word of his strange claims spreads through London.

Mary Gulliver is a woman with considerable talent and, like many women in the novel, has learnt to be resilient. Essentially abandoned, she bringing up their two children, maintains a household and takes in a young woman in dire need. Without an income, she learns the art of midwifery, a ministry that is threatened by male doctors who want to control women and the very female process of birth by the ‘efficient’ use of their tools, forceps especially. When Mary’s husband returns and reassumes control of the house and finances, drinking away most of it, Mary has to fight on several fronts.

One of the strongest aspects of the novel is the recognition that, while Mary has no external ‘power’ in the way that men have, her commitment to other women, her wisdom, skill and empathy have enormous impact on the world around her. The internal scenes of houses are detailed and beautifully evocative. In the small kitchen, the daily repetition of familiar chores, and the mundane, essential objects, otherwise not noticed, become an important part of the fabric of life. Accounts of childbirth are incredibly difficult to write well, but Chater captures it all: the hours of waiting in small rooms, with local women the bored spectators; the pain and fears of the birthing mother; the midwife’s attention to all that must be done, and the wonder and sense of miracle that attends every crying newborn. Chater doesn’t shy away from the physical detail, nor the more emotional, existential descriptions, and the combination gives a powerful account of the experience, and the importance of Mary’s role:

Bridget snuffles but Mary isn’t certain she has heard at all, the pain reaching such an intensity that she has lost all capacity for language. Insensible to their murmurs she is locked in unrelenting agony. She is a traveller, making the perilous journey across a landscape of fear. In Mary’s experience, this is the most dangerous moment of childbed. If the child sticks now, each moment that passes increases the risk that he will suffocate, smothered by his mother’s flesh. (320)

There are times, though, that Mary seems frustratingly aware of her duty as wife and her lack of power, but that is as it should be. It’s important to feel how tightly women were controlled. The garden, where Mary grows the herbs she needs for her practice gives her space to simply be herself and respite from her worries, and gives the reader some beauty and gentleness, some fresh air to breathe.

Even the bees have their role to play, always pausing first at the hollyhocks before they move on the woodruff, some elemental compulsion propelling them from flower to flower. The ants consume the garden’s dead waster, chomping through old branches and litter, stripping leaves down to their skeletal core while earthworms dance in the cool darkness beneath the topsoil. ( 42)

This is an intelligent, insightful and thoughtful novel. Chater has researched the period well, and is so comfortable with the material that London, with all its dark and welcoming spaces, its hopeful and destitute characters, comes to life. There is the manouevring of the local women; the dangers of rape and violence; the struggles of dealing with a teenaged daughter and, most poignantly, the pain of impossible love for Mary, while love blooms for her daughter.

I hope Gulliver’s Wife isn’t cast as a ‘woman’s novel’, because of its subject matter because, of course, it has relevance to men, its political commentary as important as Swift’s. I hope men read it. I hope you read it! And buy it from your favourite independent bookseller.

If you want to know more about how Lauren came to write this novel, you can find out more on Booktopia.