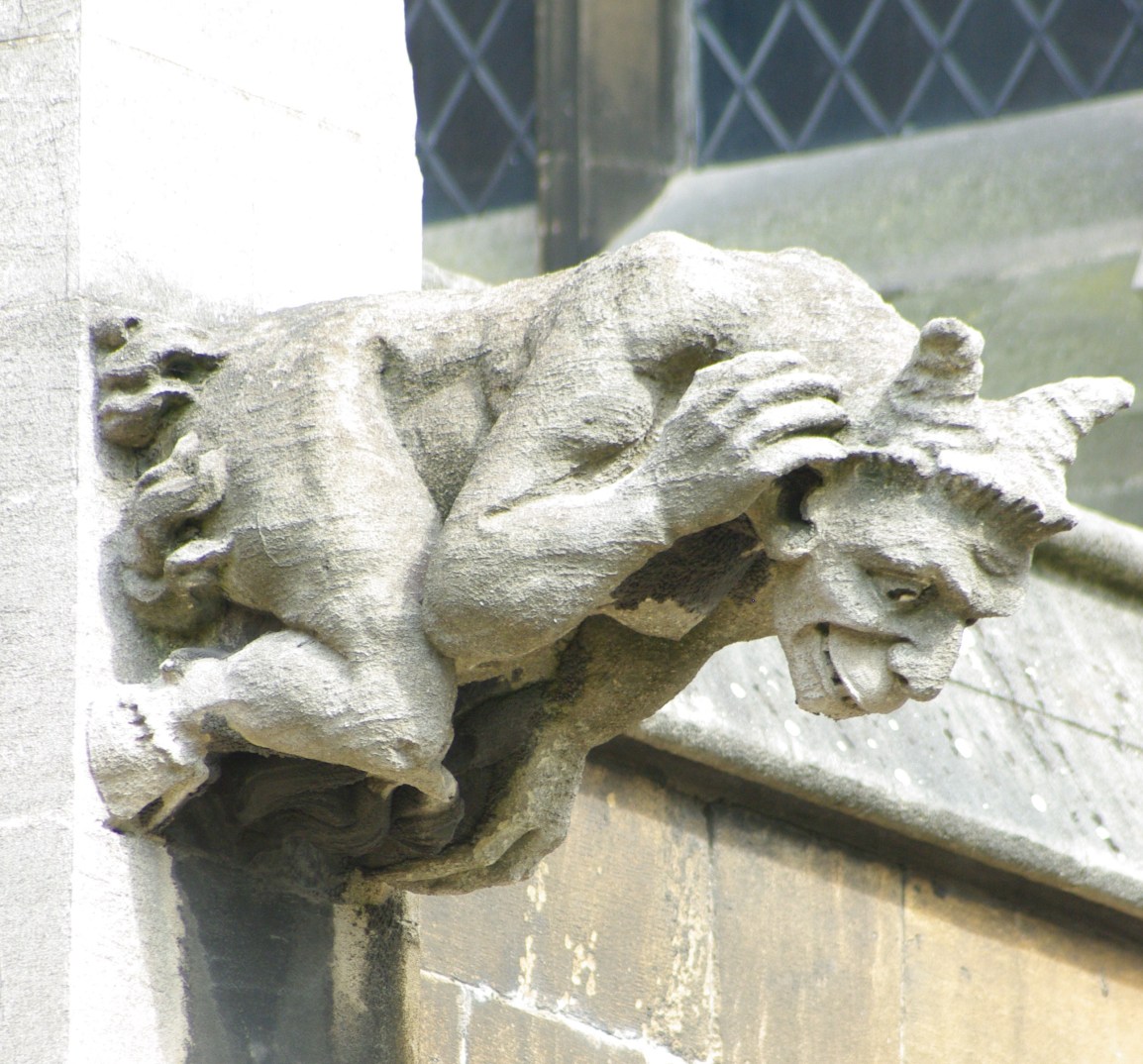 I love gargoyles, and when I was travelling around England and in Paris, I took lots of photos of them. Little did I know then that one of them would insinuate its way into my novel.

At the base of the roof was an army of gargoyles, stone-grown and
weather-worn, each one distinct, all reaching out beyond the gutters,
spout-mouths open. Creatures dragged from some netherworld
and put to work guarding the holy ground beneath. Such proud
ugliness, so assured of their right to be there, as if directing water
away from the building was merely a foil for their true status. Will
was entranced. What minds the masons had, to carve from solid
stone such creatures that seemed at once of air and earth. Hybrid
beasts: bird beak, wolf mouth, monkey snout, ox hoof; ravaging
teeth and horns; flapping ears and wings; howl and snuffle, snicker
and growl. He had seen the like before many times, on smaller
churches, but here, on the edges of the cathedral’s magnificence,
they were at once more grotesque and more impressive. Here and
there the sun flared on a shingle, then faded as the clouds shifted.
Will startled at a movement, looked again. One of the gargoyles
began to stir. A trick of sun and shadow, surely. He focused more
closely. The creature’s nose was flattened apelike to its face, two
horns protruded from the top of its head, bulbous eyes peered
around. Slowly, as slowly as stone moves, it closed its mouth, pulled
in its long neck and turned its head. Their eyes met. Will’s belly
turned to liquid.

This paragraph or two is from the second chapter of my novel Book of Colours. It’s one of my favourite sections of the novel, partly because I love gargoyles, but even more because this particular horned gargoyle seemed to insist on being in the story — not once, as here, but again and again.
When I began writing this scene of Will, newly arrived in London and exploring the city, I knew that St Paul’s would be a significant building because it was central to the city, huge and important; it’s the kind of place a newcomer would be naturally drawn toward. Gargoyles were so popular in the medieval western world, and Will is an artist with an eye for line and colour, always looking for inspiration, so it seemed natural that he would notice the gargoyles.

But as I wrote, the gargoyle turned its head and looked at Will. Not something I had planned, but I’m always excited by anything that appears, unbidden, as I write. Those intrusions don’t always work, and might have to be removed, but often they seem to be the story itself asking to take a different direction. This was one of those times.

I loved the idea of this gargoyle’s challenging gaze, and it kept turning up in the story. I followed its lead, not always sure why it was there or how it mattered to Will, and it was only after I’d finished quite a late draft that I began to understand its significance well enough to fully integrate it into the novel.

As entertaining as they are, gargoyles have the important function as water spouts attached to stone buildings to channel water away and prevent erosion of the masonry on stone walls. 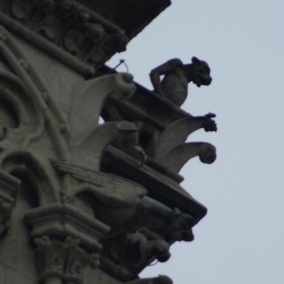 Water from guttering is directed into a channel in the back section of the gargoyle, through to the throat and down to the ground below — hence their long necks. The gargoyles on Notre Dame Cathedral, Paris, have especially long bodies and necks that look almost as if they are leaping from the building.

St Botolph’s, Cambridge
Though we tend to immediately think of medieval gargoyles, they have been used apparently as long as stone buildings have been erected. These ancient Egyptian and Greek examples from temples use more stately lion heads. It seems, though, that it was only in the Middle Ages, from about the twelfth century, that the grotesques images we think of as gargoyles began to appear.

The term gargoyle comes from the French gargouille, meaning ‘throat’ or ‘gullet’ and I especially love that it is associated with the verb gargariser, to gargle, both words drawn from the Latin root gar meaning to swallow. Looking up at some of these creatures, you can almost hear the water gurgling and gargling in their gullets.

And where there is monstrosity, there is always a legend — in this case, a French tale tells of a dragon called La Gargouille that dwells in a cave alongside the Seine River and causes enormous suffering to the people of Rouen. It breathes fire, as we tend to expect of a dragon, but it also vomits out so much water that it floods the area.

Finally subdued by a priest, Romanus, La Gargouille is led into town and burnt, though its head, fire-breather that it is, cannot be destroyed by its own element, and is hung on the city walls. Voila, a gargoyle, perhaps.

What I find so interesting about this story is the way in which the dragon’s threat by flood is subverted into the gargoyle’s obedient channelling of water to protect buildings; it’s a fine piece of revenge and subjugation.

This association of dragons with water is very common, from ancient myths such as the Babylonian dragon Tiamat that had to be defeated in order for the world to emerge from her watery chaos; Tiamat is the dragon in the sea, but at the same time she is the sea. In the Middle Ages, the dragon that St George kills lives in a moat around a town and poisons the water, and many localised folktales tell of dragons, such as the Mester Stoor Wurm, that inhabit waterways.

None of this is direct evidence for the development of medieval gargoyles, but the swirling cloud of associations is worth noting.

Medieval gargoyles are fascinating because they are an intriguing mixture of function, decoration and peculiarity: they do their job as water diverters, but they seem to be intruders among statues, carvings and stained glass windows of God, Mary, the saints and angels. They are ugly, playful, demonic, bestial, threatening, aggressive … the list goes on. 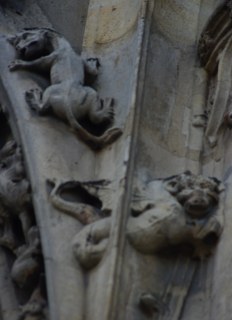 St Botolph’s, Cambridge
And they have the company of other stone creatures, grotesques, that are often confused with gargoyles. Grotesques are simply carvings, with no water spout, perching on the pinnacles of towers, attached to windows, crawling along the walls, emerging from dark corners.

Some are ugly, demonic, dracontine; some are hybrids of human and animal; some are animals, such as dogs, apes, and cats, and some are humans, often in distress. A man pulling at his mouth, presumably because of toothache, is a common grotesque.

In the West of England, and especially Somerset, grotesques are also known by the wonderful name hunky punks and are usually human or animal figures squatting. Apparently, according to the Institute of Historic Building Conservation, the term comes from ‘hunkers’ for haunches, and punchy, for short- legged. (www.designingbuildings.co.uk/wiki/Hunky_punk) 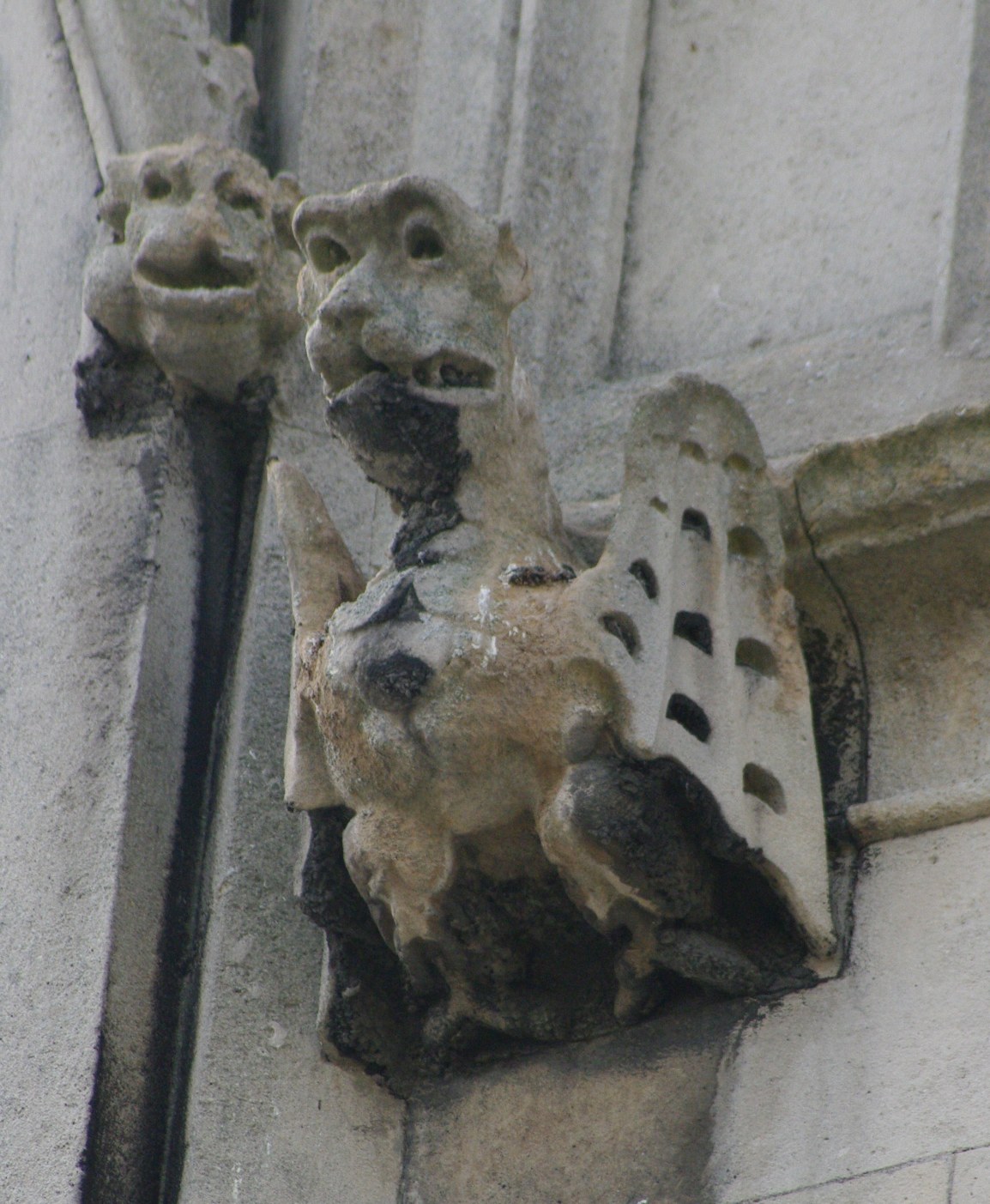 Gargoyles and grotesques seem to cause us the same dilemma as the carnival of life in the borders of illuminated manuscripts: why are they there, and so apparently out of place on a church?

One theory is that they are apotropaic, warding off evil. It’s intriguing to see them crawling around the walls while angels and saints stand tall and stately, all there to guard the church. 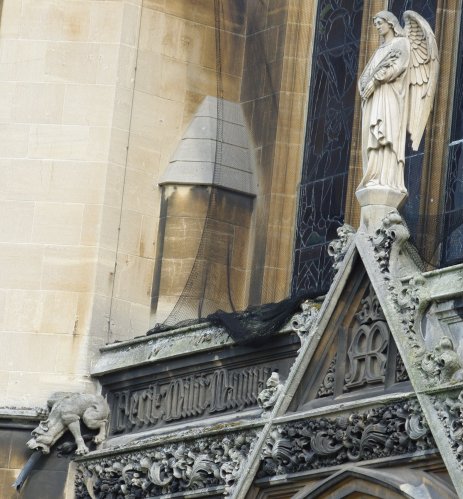 St Botolph’s, Cambridge
Another theory is that they are there to teach about the dangers of evil, or as reminders of human frailty, as with the mouth-pulling man below. If you look closely on the picture on the far right, you can see a picture of poverty and suffering — even the cloak the man is wearing is torn. As for the two in the middle photo, one carried on the shoulders of another — who knows? 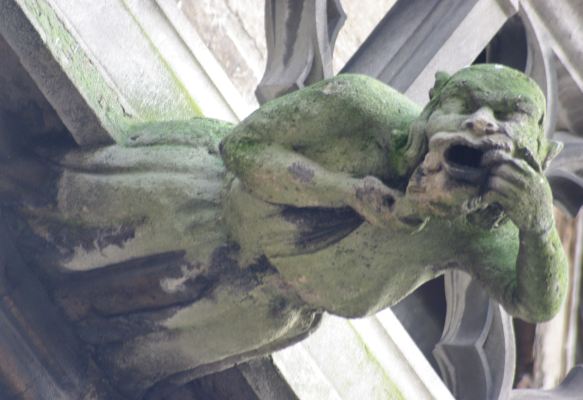 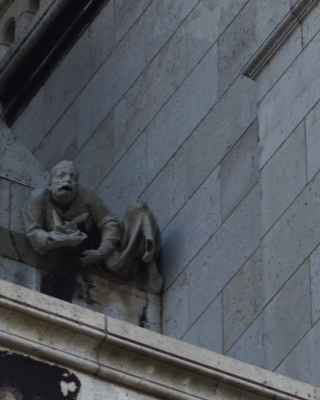 Personally, I don’t think we can discount the medieval sense that the world, seen and unseen, physical and spiritual, heaven and hell, is so vast and beyond human ken that church can rightly become the playground for a mason’s imagination, dreams and fears.
On some churches, there are so many stone creatures that it looks like the walls are alive with them, a living, seething world.
As I’ve looked back over these photos and many others that my husband and I took in the UK and in Paris in 2013, I’m not surprised that one of the gargoyles in my story turned to look at Will, and then kept popping up in all sorts of places. They just look like they have something to say, don’t they?

Back then, peering up, I was entranced by them all, but I didn’t imagine one of them would become a character in a novel. 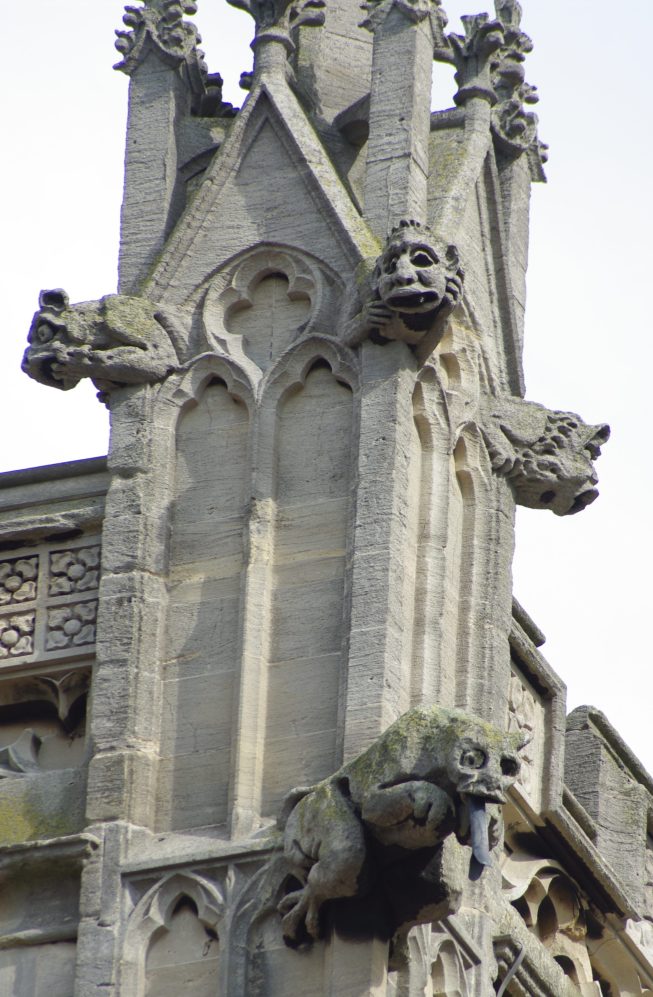 Me, with gargoyles above, Notre Dame