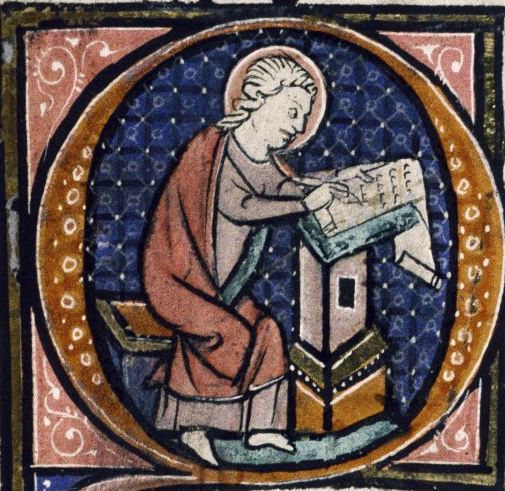 As the harbour is welcome to the sailor, so is the last line to the scribe.

These are the words of a scribe, and even though it’s centuries since that line was written, my sentiments are the same. Sort of. Scribes generally copied the words of others, so their work was done when the ink dried on the last word.

For an author, it’s difficult to know when the last line is written. Where is ‘finished’, among the editing and more editing? There’s always one more word to change, another fact to check, and always the continuing debate: comma or no comma? Then formatting, the proofing again and again, by me and other patient souls at HarperCollins.

The medieval scribe heads off for a drink, probably. But me? Just before the manuscript goes, I’m sitting on the edge of my seat, cursor hovering over the ‘send’ arrow, finger hesitating on the keyboard.

It’s a strange moment, deciding that it’s time to stop fiddling and changing words, recognising that they can never be perfect, and acknowledging that the patient editors and proofreaders really need you to send it, sign off, and let the printer take over. Step away from the manuscript!

I press ‘return’ and send it, stand up, walk away. It is done. Freedom. Release. There’s a real pleasure in seeing a long project completed, and equally, for me, a sense of regret at leaving my characters.

Have I done justice to the material? Have I honoured the people of the fourteenth century in the way I wanted? Have I put down on paper all that I have intuited about the story? Probably not entirely. I know that one day, I’ll read some of my words and wonder why on earth I used that expression; didn’t develop an idea; didn’t see what that paragraph really needed. But for now, all I can do is what I have done.

I’ve spent the last three or four years creating this novel, the story of the creation by hand of one prayer book, a book of hours, in a London atelier in the 1320s, more than a century before the invention of the printing press. My book will be typeset, copied and bound by machine. The kind of book I’m writing about in my novel took at least two or three years to create by hand, and would result in only one copy.

But what a sumptuous book each one was. Line upon line of finely formed words in black ink; capitals decorated with red ink, or filled with faces and biblical scenes; illuminations shining with gold leaf and the margins rich with vines, flowers, birds, scenes of daily life, and all manner of creatures.

Each one unique, bearing the style and skill of those who wrote and painted on leaves of parchment. 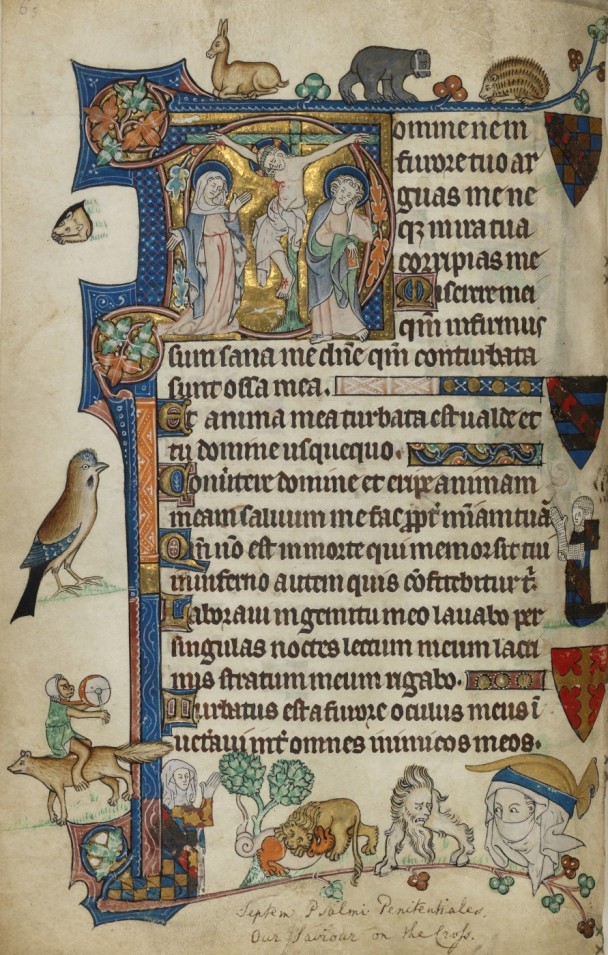 Day by day, stroke by stroke, the scribes and illuminators would have bent to their work. And in that, at least, I have an intriguing affinity with my fictional characters, all of us working with fine attention to each word and image.

The scribes generally copied, rather than composed, and though the illuminators were to follow convention, they also had some opportunity to invent, and play, so I feel a real affinity with their visual mode of storytelling.

For both illuminator and scribe, the work was hard and physically taxing, and some scribes took the opportunity to put down their laments in ink at the end of a text:

‘Writing is excessive drudgery. It crooks your back, it dims your sight, it twists your stomach and your sides.’

‘The work is written master, give me a drink. Let the right hand of the scribe be free from the oppressiveness of pain.’

‘St Patrick of Armagh, deliver me from writing.’

We might smile now as we read these words, but I hope it is with empathy. Scribes and illuminators would have worked by lamplight, and often in the cold. And without ergonimic chairs! We struggle now with shoulder, neck and back complaints from too much sitting at a computer — I’m writing this at my standing desk for just that reason — but imagine bending over, peering close at the parchment, or writing for long hours with a quill. And for tired eyes, only rudimentary spectacles. 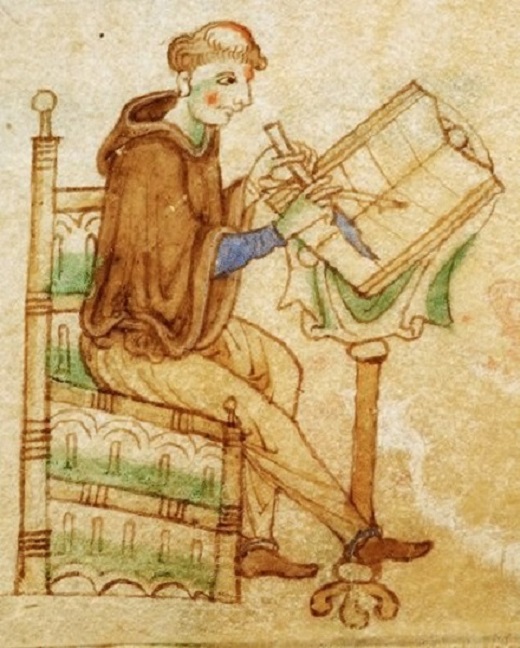 The Gospels of Kildare, BL Royal 13 B VIII

Others complained about their tools:

‘Let me not be blamed for the script, for the ink is bad, and the vellum defective, and the day is dark.’
‘A curse on thee, O pen!’
‘Cithruadh Magfindgaill wrote the above without pumice, and with bad implements.’
‘This parchment is hairy.’

I wonder how they would feel to realise that their words had travelled on for centuries and were rendered around the world on backlit screens. A kind of immortality they wouldn’t have expected, or wanted, perhaps.

My favourite image is this one of St Hildebert. 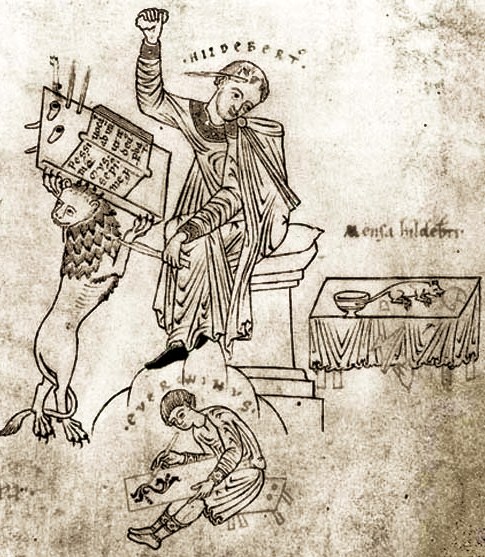 So much is happening, and it’s just how I imagine the real, day-to-day business of creating a book. Hildebert the scribe raises his hand, ready to throw a stone at a mouse that is eating his cheese. Not content with chasing the mouse, he writes his lament in the book on his desk: ‘Most wretched mouse, often you provoke me to anger. May God destroy you!’

The whole picture is so full of energy, that even the lion that is his desk seems alive. Nearby, an apprentice seems so absorbed in practising his decorations that he takes no notice. Or perhaps he has seen and heard it all so many times before!

This image above all reminds me that so many aspects of our lives are different seven or eight centuries on, and yet so many things remain the same. The work of making art of whatever kind — even gorgeous books of prayer – is no ethereal occupation, but hard work.

And its own particular delight and reward. Whatever advances in digital technology, we still love the smell of paper, turning the pages, rubbing our hands over the cover to feel the matt or gloss card, the bumps and ripples of embossed letters and images. We keep them, objects we love.

My cover! So beautiful. Printed on a machine, but so carefully and artfully designed by Sandy Cull. I couldn’t ask for better binding for my words.