Launch. It’s a good word. You can extend the ‘au’, stretch out the vowels for as long as you have breath for it, if you want. Laaaaauuuunch. It means to set in motion forcefully, according to the OED. It’s what we do to ships, sending them down the slipway with a bottle of champagne; what we do to rockets, with the force of explosion; and what we do to books. Apparently publishers are now less inclined to have book launches and instead have book events. And that’s a shame, because every book deserves to be set in motion with a bang, a touch of champagne and a cheer. 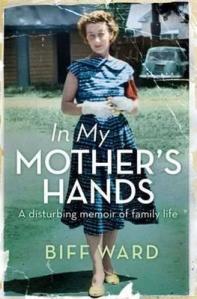 So it was a special delight, a few nights ago, to attend the launch of Biff Ward’s memoir of her mother’s mental illness, In My Mother’s Hands, hosted by the National Library of Australia.

Three hundred people filled the conference theatre at NLA, many who knew Biff personally, some who had heard her interviewed and decided they wanted to hear more. It was a night with intelligent speeches and warm goodwill.

In introducing the night, Margy Burn, Assistant Director-General, Australian Collections & Reader Services, pointed out that the Library was the perfect place for the launch because (apart from happily seating so many people), it has been something of a home for Biff. It holds many of the records that Biff used to research her book, including writings and letters of her dad, Russel Ward, an eminent Australian historian. Alex Sloane of ABC Radio 666 spoke of the beauty of the writing, of Biff’s candour in telling her story, of the quality and depth of her research. She officially launched the book with a loud and fitting Hurrah from the audience. Our tiny rocket explosion, bottle burst.

In her response, Biff told us that many people have asked her if writing the book has been cathartic, and her answer has been an emphatic, No, because she has spent twenty-two years in therapy. This means that the book is personal and heartfelt, yet free of emotional snags lying in the murky depths. It can now tell truly the story of mental illness in ways that others may hear clearly, especially, hopefully, to help those caught in some way in the struggle themselves.

And then, we all climbed the stairs to the foyer for drinks and nibbles, and for Biff to spend over an hour signing books for people in a queue that snaked across the building and looked like it would never shorten. The bookshop ran out of copies and are waiting on supplies from the second printing from Allen & Unwin.

The night was the best of such occasions: there was genuine delight and support for Biff and her achievement; admiration for the book; thoughtful and lively speeches, and the sheer pleasure of being at such a joyful occasion.

And for me, especially so, because Biff is a member of the writing group I attend. Over the past years Biff has discussed with us the meanderings and musings of her work: finding the true focus of the memoir; discovering new records; contacting relatives and old friends to uncover new stories; negotiating the ethics and responsibility of writing a story where the lives of others may be impacted; sharing and rewriting chapters; editing and more editing; finding the right word. And then, at last, the manuscript ready to send out to others, the journey of finding an agent, a publisher, signing contracts and negotiating more editing, and then some more, discussions about the cover, the photos, the preface.

Until the day Biff produced the final product: an advance copy. Complete. We passed it around the group and as I turned the pages it seemed a small miracle. All that planning, work, insight, discovery, struggle, debate, pondering, rewriting — there it was, complete and bound with its beautiful cover into a small package. An end.

An end, but only of sorts. Last Thursday at NLA, the book set out on its own, with Biff’s name on the outside, her words and her marks throughout, but now in the hands of many to read, ponder and make of it what they will. Set in motion into the blue, be it the sky or the sea.

It reminds me again of the importance of sending out these small packages of words (or their electronic cousins) that can change lives.

5 thoughts on “With a bang, a touch of champagne and a cheer”