Names matter. My parents apparently disagreed about what my name should be, one wanting to call me Beverley, the other one (I’m not sure who wanted which) wanted to call me Robyn. They compromised and gave me both names, Beverley Robyn, then proceeded to call me by my middle name. Who knows what relationship dynamics could be drawn from that story! I’ve decided to go with Robyn, which feels so much more like me (though the order on my birth certificate is the official one I must answer to). Beverley was always what adults called me, usually when I was in trouble. Or banks and Centrelink, ditto. Bev was what my friends called me, but it’s such a non-word, that seems to collapse before it’s even begun (though a friend of mine who is also Bev manages to give the word a bit more oomph).

I’ll pass over the naming of my children for now, and go straight to my current naming requirements: chooks. We have two new Isa Browns, currently nameless. They’re numbers 5 and 6 in the Murrumbateman tribe, though numbers 1 and 2 have since passed on to fox-free ranges in the clouds. They were Lacewing Wyandottes, birds bred mostly for their looks: their feathers that loop beautifully like lace.

Cleopatra was black and gold, and just demanded a queenly name; Esmerelda was brown and blue, just as beautiful but less grand. Of course, day to day they became Cleo and Esmay and surprised us by laying eggs fairly regularly, Esmay’s white and delicate, Cleo’s brown and larger. Cleo died of delayed shock, thanks to the neighbourhood dog, and Esmay slipped into a sort of chook dementia, still able to eat and drink, but prone to walk into walls, or forget where the coop was. She seemed happy enough, in chook terms, and died quietly a few months later.

Numbers 3 and 4 are Australorps, big and greeny-black. We tried for dramatic names to go with their colour: Medea — well, it’s hard to be any more dramatic than her — and Pocahontas, inspired I think by the black hair of her namesake. They’re professional egg-layers and supposed to lay like the clappers, taking only Christmas day off, though ours lay when the fancy took them. Not often, to begin with. Not at all anymore. Perhaps they objected to the names. 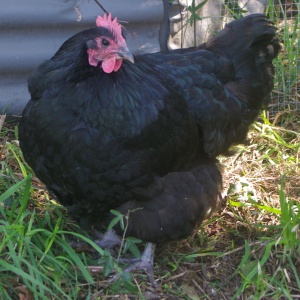 They’ve taken on the look of Edwardian widows, moving slowly and dressed in black silk with voluminous skirts, puffed sleeves, ruffs and pleats. Perhaps they think appellations akin to Lady Bracknell and Queen Victoria would be more suited to their station.

And so they’re not sure about numbers 5 and 6 disturbing their peace. The Isa Browns are caramel-coloured, young and thin with long legs and a tendency to stand with one leg lifted as if they’re doing the Tai-Chi move, white crane spreads its wings, or maybe playing fairies. They’re completely intimidated and tend to find a corner wherever the black dowagers are not. Perhaps names would give them confidence, but I don’t know what. I’ve thought of Tinkerbell, Titania or Ariel … but no, that last one would be unwise. And they need a name they can grow into; after all, Tai Chi moves are really a form of martial arts.

Here they are. All suggestions gratefully received.

8 thoughts on “Of the naming of chooks …”