Kusadasi, Turkey. We sit in a courtyard at the edge of a cliff on a small promontory. On one side there is a clear view of Ladies’ Beach, a long seaside promenade with restaurants and cafes; on the other side the land curves around toward the docks where cruise liners arrive almost daily. All around is sea that seems to be stilled, like us, by the hot evening. Samos is visible, too, only a short ferry-ride away.

We sit at a table, fourteen of us, a farewell dinner for an important man in the district. Apart from Alan and me, everyone is Turkish. Our hosts, Ismael and Hafize, speak English quite well, and they tell us that one or two of the guests have some English. The men, I understand, are involved in legal administration, and the women are married to them. The man sitting opposite me is a district governor recently promoted to Istanbul, and I gather the dinner is in his honour. He shakes hands and agrees that he speaks some English but he would rather speak Turkish. He is a man who wears his position in his bearing, and while he nods and laughs, he says very little. His wife, to my right, has no English at all, and so we shake hands and smile, say merhaba, hello, but no more. Ismael has decided that we should sit in the middle of the long table so that we can be included, and that is thoughtful, helpful, though my first instinct was to sit at the end so as not to be an obstacle around which conversation has to manoeuvre.

I’ve been in Turkey three days, and I’m slowly picking up basic words of greeting, merhaba and günaydın; thank you, teşekkürler; tea, chai; coffee, karve; very beautiful, çok güzel (essential for Hafize’s wonderful cooking), and importantly şeftali, peach, because the word peach in Turkish is a swear word. I’m embarrassed when people apologise for knowing little English, though they tell me English is now taught in Turkish schools. Still, this is their country, and I’m the visitor. It’s my job to learn the language.

Some of us drink wine, though others have Coke or water, safer for those in government in the current conservative political atmosphere. We eat fish, caught this morning, salad, calamari, yoghurt, eggplant and pepper dolmas stuffed with rice and tomato. Stray cats begin to gather. The conversation goes on all around, across me, across the table, down the length of the table, water bubbling around a rock. It’s good, it gives me a chance to focus entirely on extracting the bones from my fish; I haven’t yet learned the skill of peeling away the spine intact, and I check each mouthful carefully. We put our remnants — fish head (!), spine, bones, skin, onto a plate and when it is full, the governor throws them into the garden away from us, for the stray cats. They eat hungrily, and I watch the occasional stand-off as two cats vie for one fish head, their backs arched, growling low.

Meanwhile, at the table, the conversation goes on. My fish finished, I look around some more, listen closely to the gusts of words floating around me. The sound of the Turkish language seems to be more flowing, softer than Greek, more softened consonants, sounds like ‘sh’ and a ‘ch’ and a softened g that slide easily into and around the vowels. Greek, to my ears, has many more sounds like ‘p’ and ‘k’, syllables that are more distinct and decisive. Perhaps it’s my Australian ear, and the Australian habit of hardly opening our mouths when we speak, that finds Turkish a little more akin (though those Turkish people who do know some English tell me that Australians are the hardest to understand). It’s the intonations as well as the sounds that are different, and I wonder if the two go together. Greek people tend to sound more insistent, more passionate, with strong intonations to their words, so that sometimes it’s difficult to tell what might be an argument from just a chat. In Turkey, the tone of conversations is more level, more easygoing.

I look around. Alan is chatting with a man sitting next to him who has a boy on his knee, about six years old. The little boy wants to know about Australia: does it have a desert, does it have the same stars, and what are they called — surprising questions for a child, and a pleasant change from talking about kangaroos again. I wonder about this young boy’s vision of the world, large enough to envisage constellations and vast stretches of sand. My host, Hafize, leans forward and explains to the group of women at the end of the table that I am from Australia. They smile, look at me, murmur a welcome. Someone, Hafize says, wants to know if I like Turkey. I do like what I have seen of Turkey, which is a good thing, because that question in that context has only one answer …

The conversation drifts away to other things, apparently, and so do I. A full moon is beginning to rise above the apartment blocks nearby, so I watch it, only yet a half circle, glimmer through the trees. People continue to chat and I wonder what they’re talking about; I smile when they laugh because it’s catching, and because I know something of what they mean. The waiter brings chai; it’s very strong, so I try a cube of sugar to lessen the bitterness. The tea is deep amber in its beautiful glass cups shaped like an hourglass, apparently given a Turkish name that means ‘thin waist’, a kind of variation of the female anatomy and the champagne glass. Plates of watermelon, black grapes, light green figs and melon arrive. I take a little of each, so cooling in the still hot night. Nearby on the stones a cat dozes, full of fish and content. The words of this blog post begin to take shape in my mind, in a meta-fictive way that seems somehow appropriate. I look up at the moon, now free of the buildings and completely round, and I think that, at times, socialising in a country where you do not speak the language is perfect for an introvert. 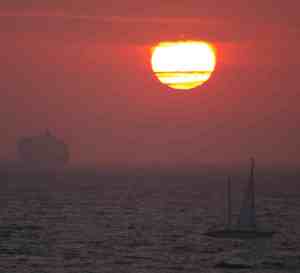 2 thoughts on “a full moon, stray cats and gusts of words”