Solon of Athens heard his nephew sing a song of Sappho’s over the wine and, since he liked the song so much, he asked the boy to teach it to him. When someone asked him why, he said: “So that I may learn it, then die.” 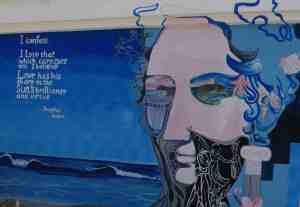 How to say anything about the Greek islands without slipping into cliché? The water really is as blue as they say and the Aegean really does seem to stretch on forever, but what surprised me were the mountains that rise up almost directly from the coast, sharp and tall and wild.

In summer, holiday season, the main cities are thick with people, cars, trinket shops and stray cats, so it was good to get out of the crush and explore.We hired a car on Lesbos — a rattly four-wheel drive soft-top Suzuki, though it may not have been quite so rattly if it wasn’t for the roads. Trying to avoid the bedlam of holiday tourists and cars on the single road through Mytilene, the main port town, we decided to take a detour around it. The route looked simple enough on the map, maybe a little bit further, that was all. 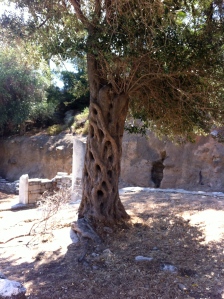 But the map didn’t show topography … up we went, more and more slowly, on a road that curled its way along the side of a mountain, higher and higher. We drove for slow miles, beginning to think this detour was a disaster, but the top of the mountain gave us the most magnificent views of the Aegean stretching out on all sides, curving bays and tiny towns tucked into the arms of valleys. So we drove on, up and then down, bitumen roads turning to dirt and stone, always narrow enough to make me nervous of falling off the edge, then to cobblestones through villages, with room for only one car to pass, especially where the tavernas had encroached.

Tables with blue and white checked tablecloths and chairs with cane seats cheerfully lined the roadway, food always having priority over cars. In the villages in the evening, only a little cooler than the sweltering day, women sat on benches or strolled and chatted together, some pushing prams, and children played or rode their bikes, slowly getting out of the way when a car came round the corner.

We rattled our way down one track looking for the remains of an ancient settlement, by that time recognising that the map was an approximation, a finger waving vaguely in a general direction, and that the roadsigns were about the same, popping up here and there, more for fancy than function. At the end of this one track that gradually turned to sand we didn’t find our ruins, but we did find a beach, the Mediterranean version with no sand, but smoothed stones and pebbles that hurt like hell until you can dive in. The water was of course beautiful, and seemed to stretch on forever. We swam and floated, but I mostly tried to absorb this moment: swimming on Lesbos. The island is of course the home of Sappho, and it’s not hard to imagine her writing where she could see both wild mountains and magnificent sea. Maybe Sappho had swum here, on this beach, way back in the seventh century BCE …

We swam as well on Samos, though this time much less romantically, on a beach in a small cove ‘owned’ by the

hotel where we were staying. For an Aussie it all seemed a bit tame: the plastic couches lined up, the umbrellas, the young guy who brings towels (and won’t let you carry your own and deprive him of a tip), and who will bring drinks if you have a small fortune to spare. Lots of people were set for the day with books, mobile phones, sun tan lotion (the Greeks work hard on their tans, no notion of hats or sunscreen), white wine and water. The cove was beautiful but we were too impatient to be out and seeing things, so we swam and left.

Herodotos, the historian and writer, grew up on Samos (fifth century BCE) and has written about the wonder of Hera’s temple at Pythagorion. Most of the site has fallen now, but the stones are being slowly uncovered, altars revealed, and pillars reconstructed, towering up into the sky. Some think that Homer was born on Chios, an island that we didn’t visit. Perhaps it’s fancy, but it doesn’t seem surprising that these tiny islands produced such powerful writing, so much grandeur and earthiness in the combination of beautiful coast, massive temples and tall, wild mountains.

But wilder again was Samothrace where goats seem to be the best prospect for farming; from time to time we heard the dull clang of their bells as they wandered around nibbling at the coarse weeds and grass. One evening, having dinner in a little village high up on the mountain (the kind you think are only made up in the movies), we saw goats casually grazing on a narrow ledge even higher again.

It’s easy to understand how ancient religions have chosen for temples and churches these mountains that seem to reach up into the clouds, or heaven. The story goes that Alexander the Great was conceived on Samothrace at the mystery cult rites where his father Philip II met his mother Olympias, and it became a favourite place for Alexander, who extended the temple complex there. I thought maybe I’d had enough of these sites: the piles of stones, toppled pillars, the effort to understand what it all meant … until I visited the Sanctuary of the Gods.

I wandered up the path, through the trees and out into a broad area of stones and pillars, and felt it: the silent hum, the shiver of something more, even among the fallen stones. Here the rites of a mystery cult were celebrated, each initiate sworn to secrecy, and apparently the secret is still kept from us, though it does seem that a river was diverted through the site, and initiates symbolically crossed from one side to another.

On a hillside nearby, others of the cult could watch, and when the rites were finished, everyone gathered in a huge stoa, an open space lined with pillars, where they would celebrate and eat.

In every ancient site we have seen, religious rites are focused around sacrifice of some kind, then cooking and eating together. In some places the remains of huge altars still stand, complete with rings in the ground for tethering the animals. The gathering together to eat was central to belief and to culture. Ultimately, whatever prayers were spoken or rites performed, it all ended with the very bodily needs of eating and drinking, shared with others.  Picnics, one guide told us; barbeques, we said.

Our friend Dennis, an expert on ancient dining  and dining rooms, reclined on the remains of a triclinium with a packet of Snickers and a bottle of water, just to show us how it was done.

4 thoughts on “Where Sappho swam”